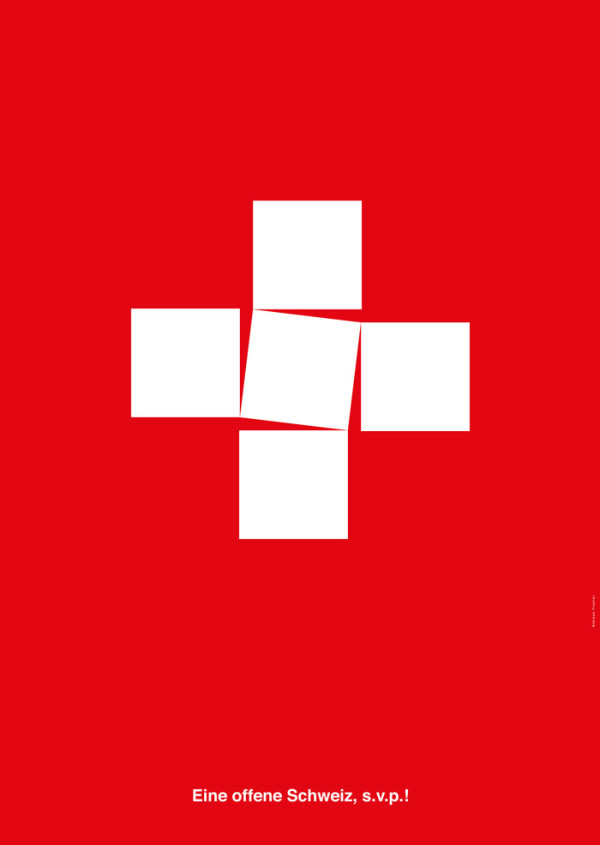 Switzerland should open their boarders for refugees. In small letter „s.v.p.“ means in French „s’il-vous-plaît“, in English „please“. But in capitol letters, SVP stays for the Swiss right wing party SVP (Swiss Popular Party), who is against all immigration of refugees. 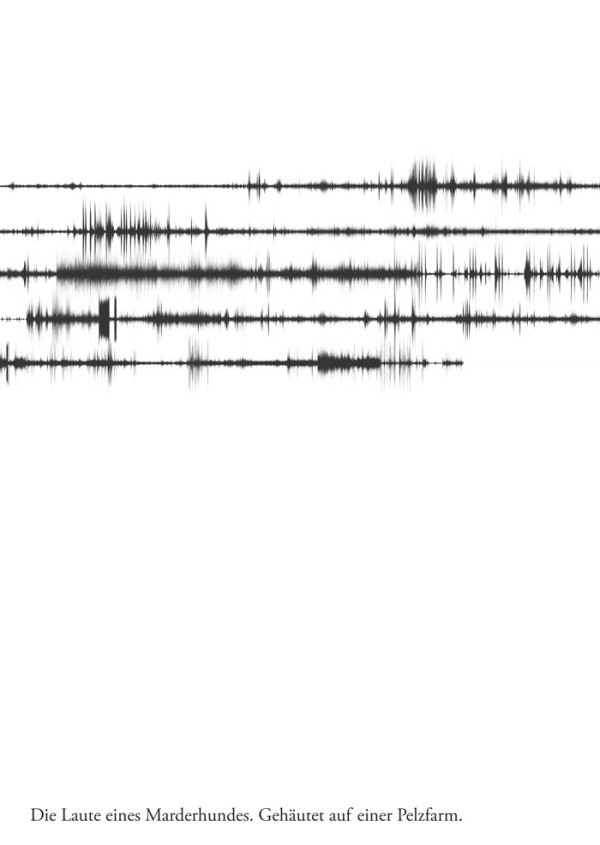 A raccoon dog, skinned alive on a fur farm: Its screams separated from a sound track an visualized. 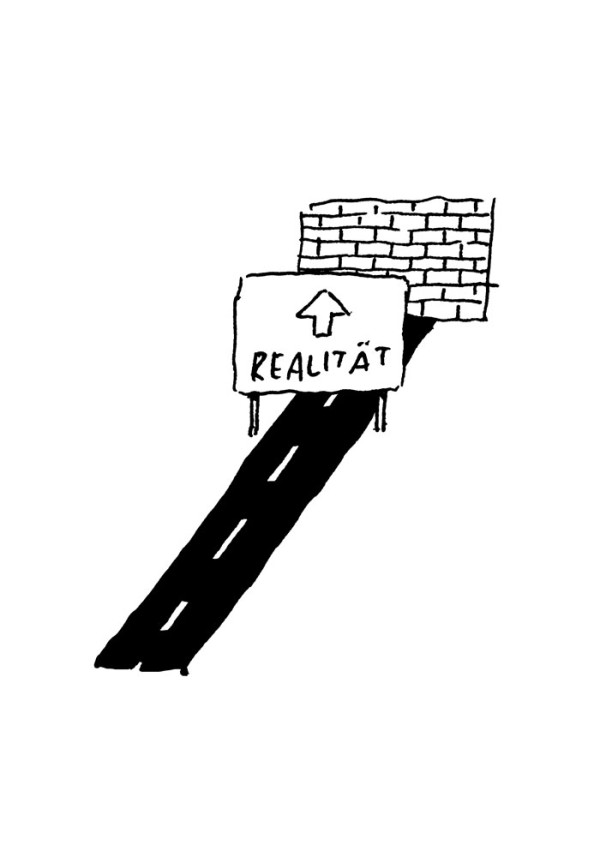 Faster! When do we finally arrive? 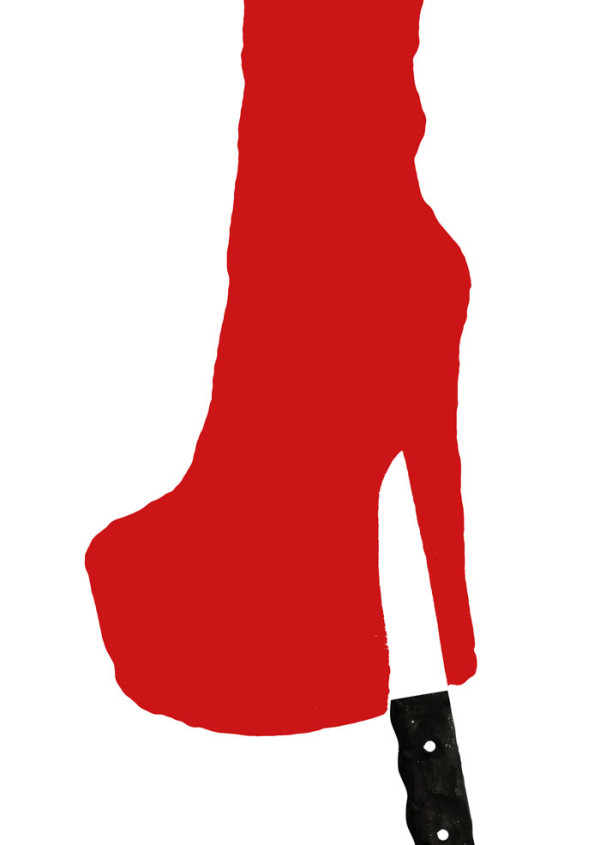 None of them did. Trapped in a net of unscrupulous and avaricious human traffickers, all over the world hundreds of thousands women are accompanied by pain and anxiety – their whole life. 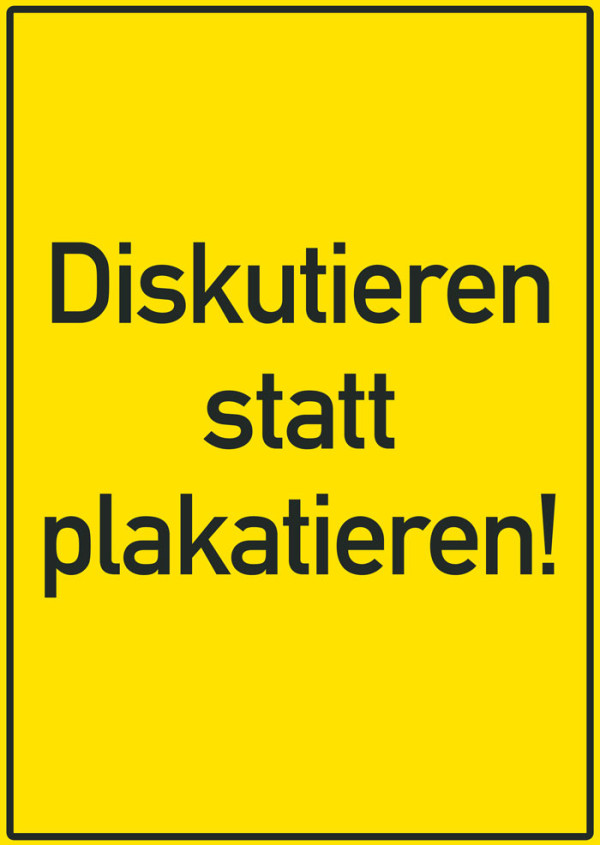 The poster takes up on the design of typical german prohibition signs and their language. There are many prohibition signs in Germany and the yellow ones with black borders are a common sight. Often applied to guard against trespassing or to keep people from putting up posters.

The signal effect and imperative nature of these signs is retained in order to play with familiar visual patterns. The command „Diskutieren statt plakatieren!“ could roughly translate to „No Posters. Discussions!“

On the surface „Diskutieren statt plakatieren!“ looks like a prohibition sign but beneath that is a demand for a more nuanced culture of discussion beyond slogans and the language of campaigning. 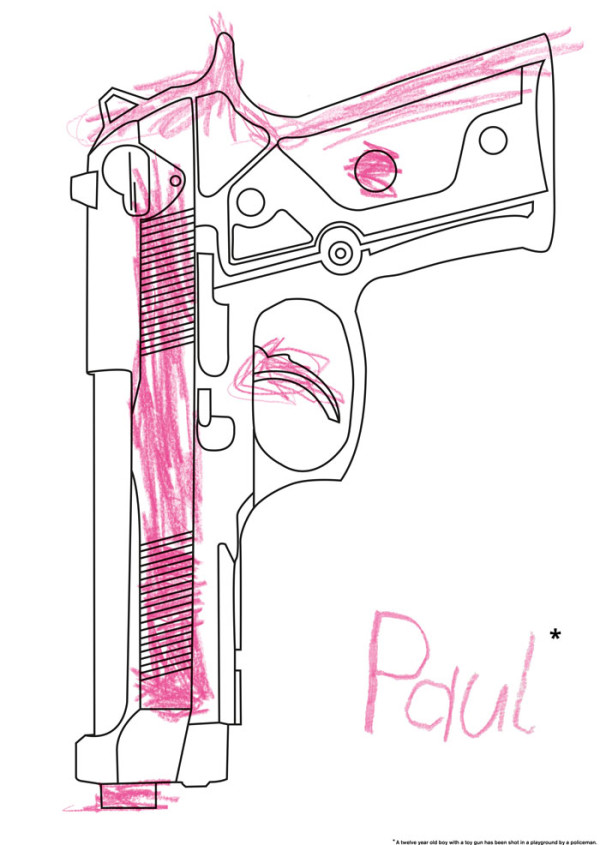 A twelve year old boy with a toy gun has been shot in a playground in Cleveland, Ohio, by two policemen. 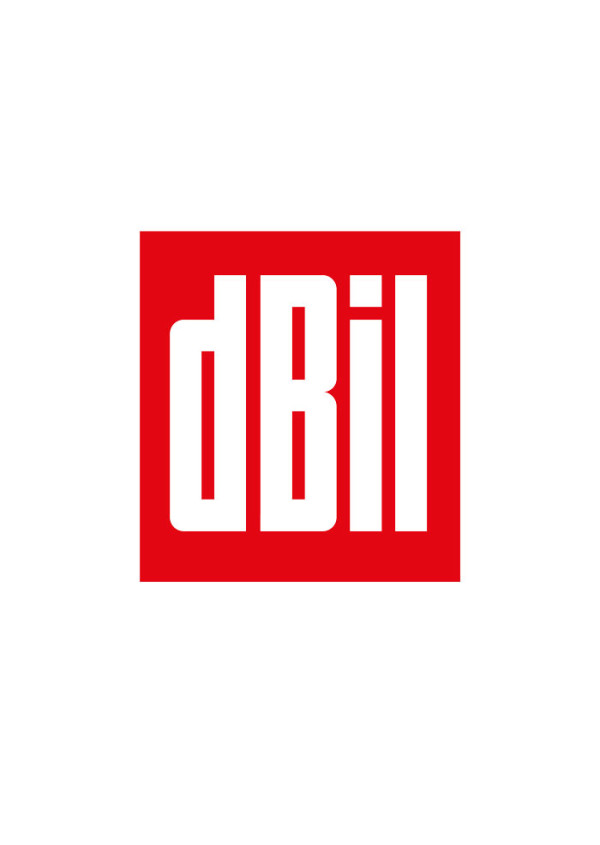 These Times of Feeble Minds

An overcrowded and digitally leveled humanity is in dear need for a sense of significance. Who whines is fed hot air through a thick teat, which should be be enough to fill them up. 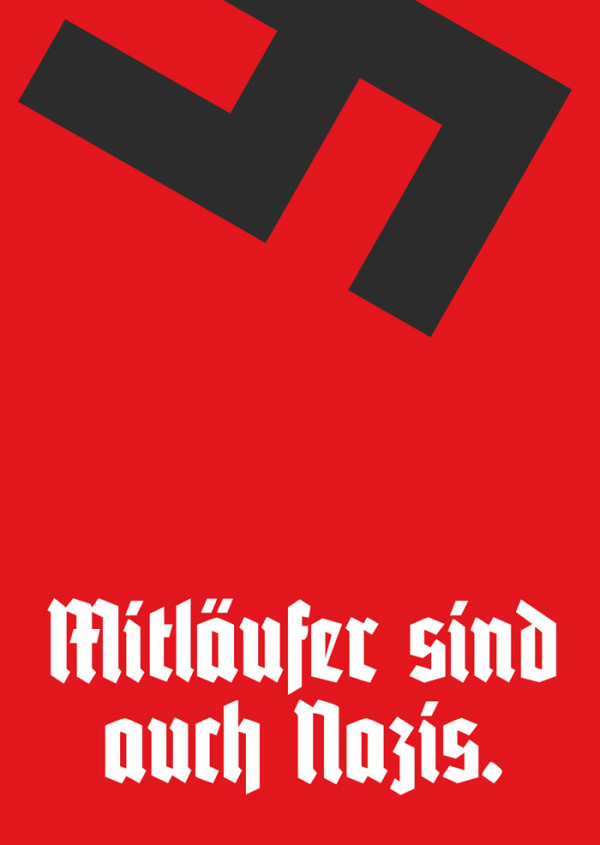 Hangers-on (hangers-on are half nazis)

Not considering yourself a Nazi does not mean you’re allowed to be rassistic towards others in public. Same as the sentence „I don’t have anything against foreigners, but …“ often ends with the complete opposite opinion. This is a poster to remind all the concerned citizens on what the other people really think about their behaviour. 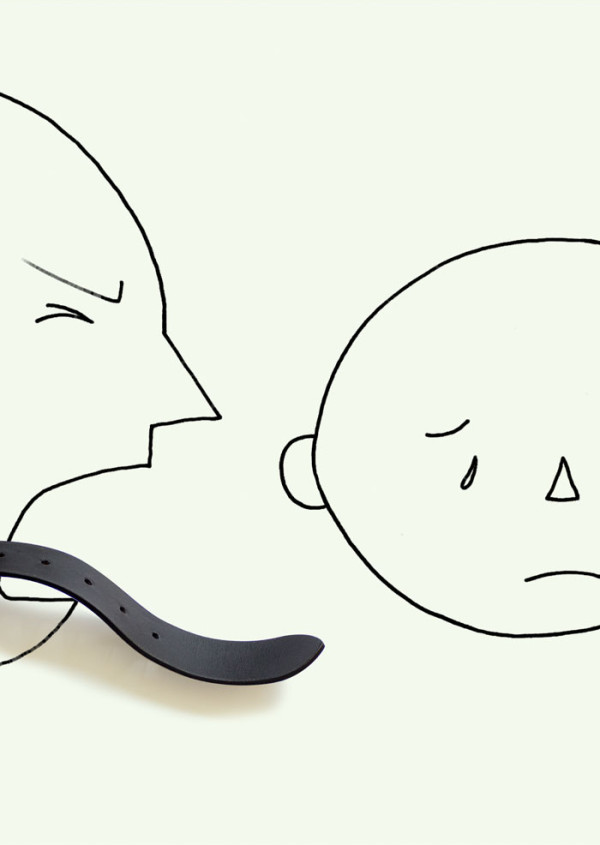 Verbal abuse is just as harmful as the physical abuse. You have to correct children wisely and with love. 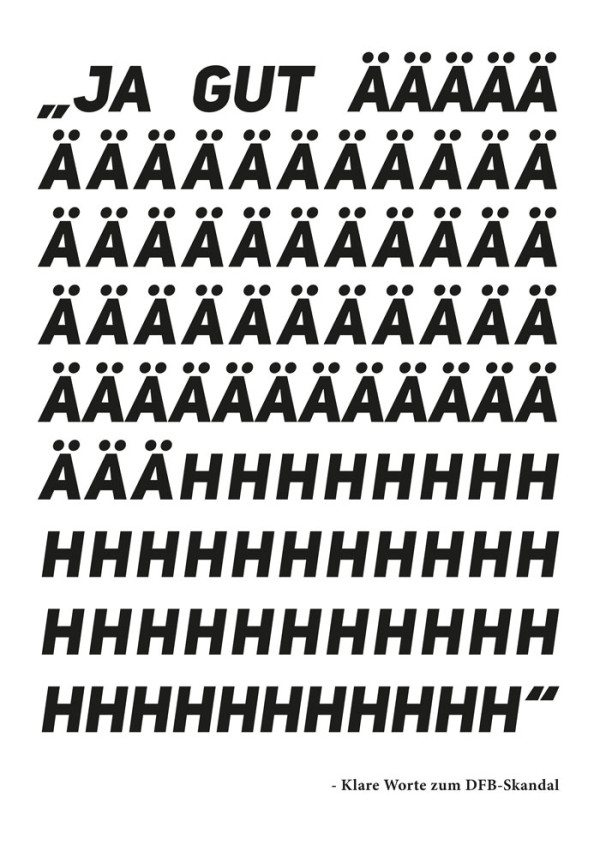 Unsolved Payments, which apparently nobody knows about. Corruption scandals cast a shadow over the world of soccer. My poster puts the trouble in explaining of the German Football Association in a nutshell by imitating the rhetorical skills of Franz Beckenbauer. 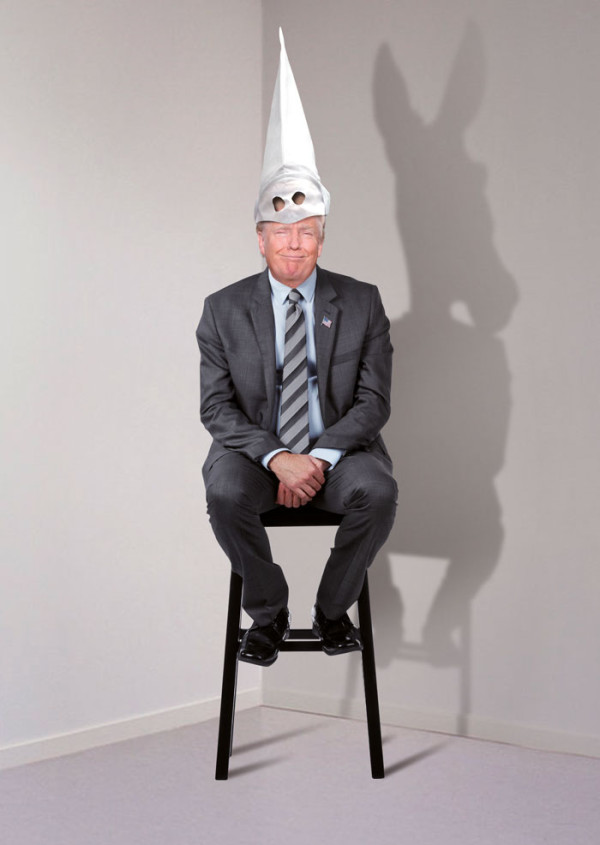 Trump represents all kind of extremism. This is beyond politics. This is about basic human decency. Integrity, loyalty, honesty. Trump has misrepresented and attacked the poor, Latinos, African-Americans, Asians, immigrants and other minorities. He has openly mocked the disabled. He has called women “fat pigs”, “dogs”, “slobs” and “disgusting animals”. He’s praised for “telling it like it is,” except that Trump rarely says anything rooted in actual truth.

This is very serious: the most powerful country on earth has a fascist to run for president and about to be nominated as Republican candidate and perhaps President of the United States of America.
My poster is a satire of “kkk” using the “dunce cap” and the internet slang “kkkkk” for a big laughing. 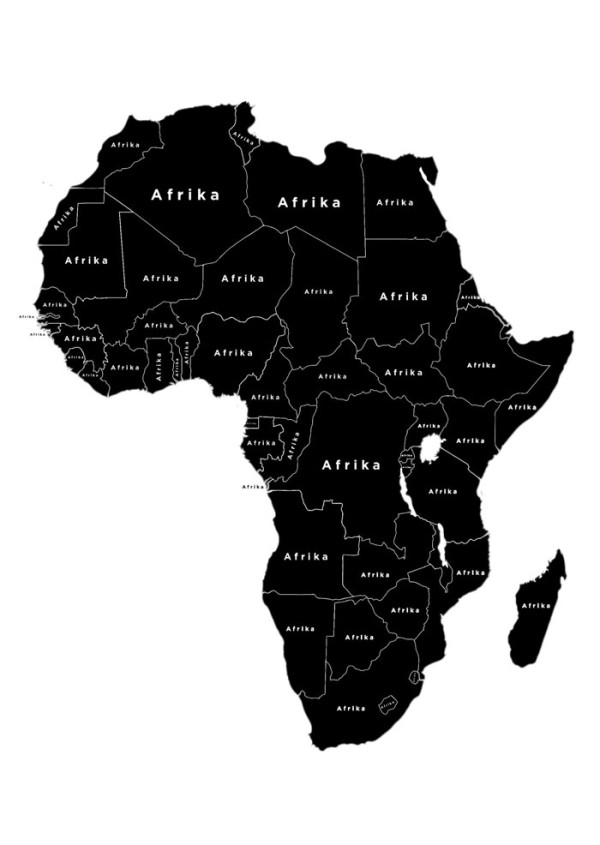 It is the second largest continent of the world. More than 1.000.000.000 people live here, spread over 54 different countries. Its territory covers about 30.200.000 km² and is split up into 6 time zones. More than 2000 languages are spoken on this continent. But still, over and over again, we only talk about “Africa”. 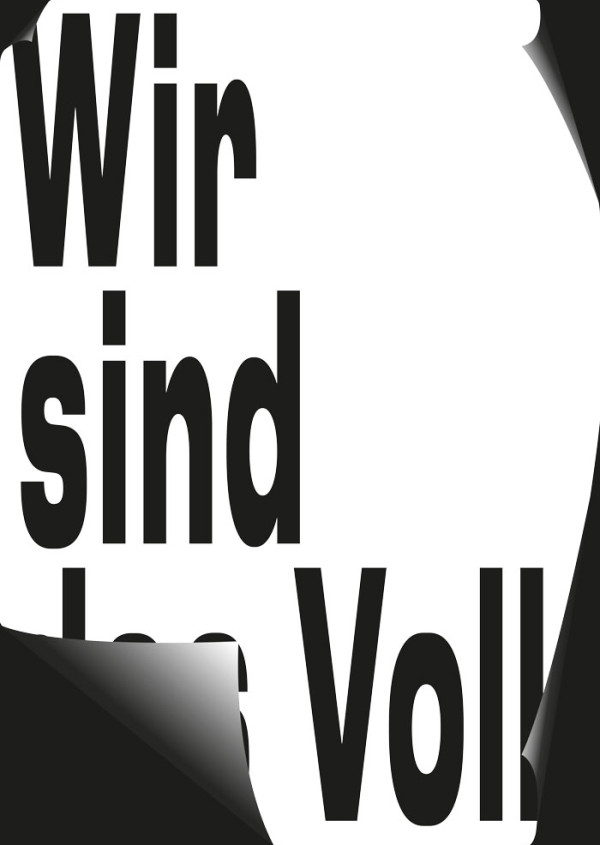 We are the people! (Wir sind das Volk!) The chants of the german reunification were the term for the peaceful break, now they are used by racist movements to demonstrate clumsy pure hatred:
“We are full (Wir sind voll), there is no space for refugees, no space for new ideas. We are full of fear of the unknown, full of the wrong answers to the wrong questions.”

You are filled! Sober up! 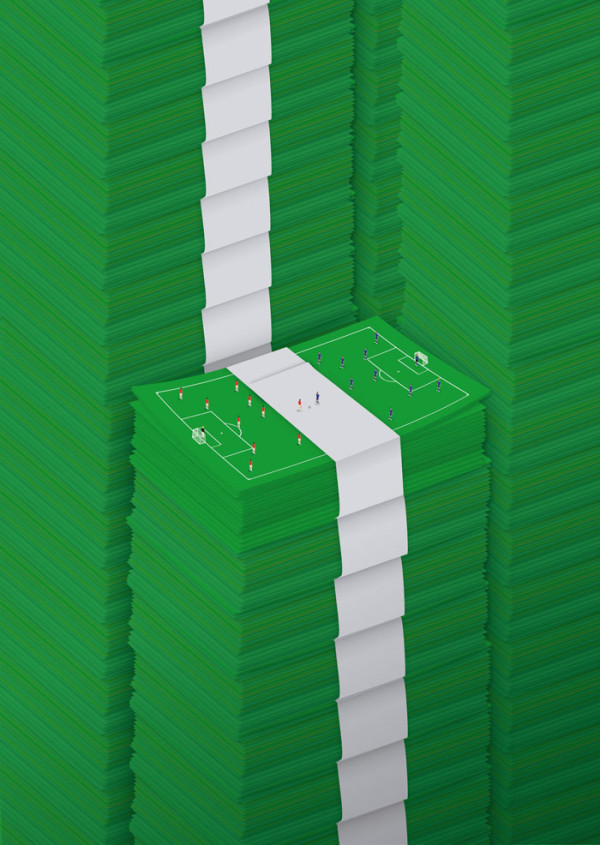 Unerringly like a striker is chasing the ball, the big business that is the driving force behind world’s soccer is hit by one scandal after the other. But time and time again there is only the yellow penalty card for the ones responsible. The spectators as well as the players are to tacit complicity. It’s time for a dismissal! 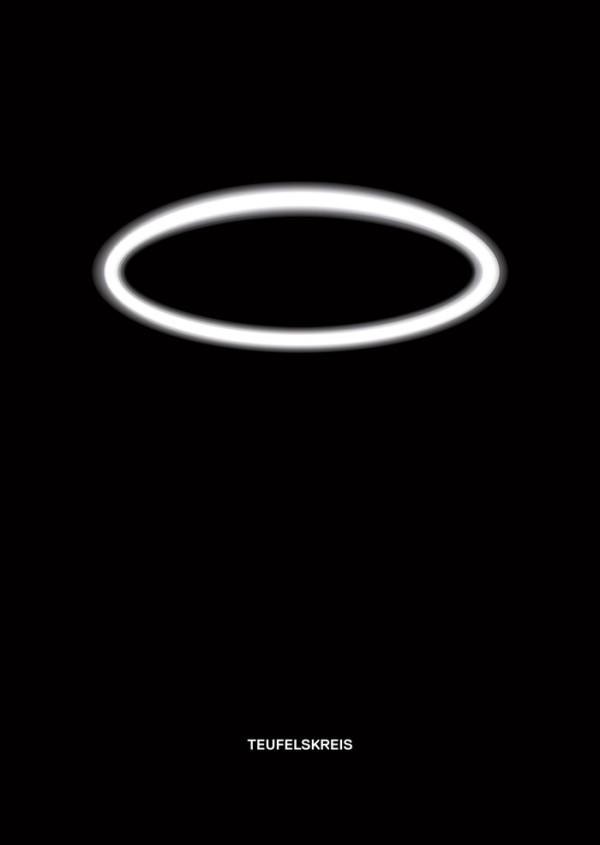 Being stuck in a fundamental inerrant religious pattern and therefore feeling infallible and unmistakable, prone to evading one’s responsibility. 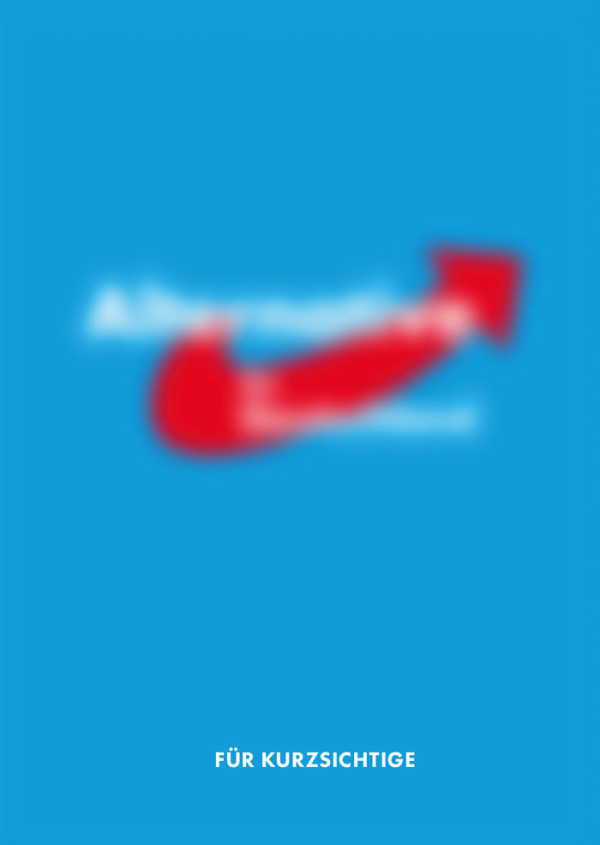 At a time when society is divided by global challenges, right-wing populists often come up with simple solutions, not aimed at the complexity of the problem at hand but at peoples fears and worries. Rising refugee figures have stirred a debate in Germany in 2016, thus being a catalyst for the party “Alternative für Deutschland”.

Peoples insecurities and resignation in politics have led to electoral success of the party in question. 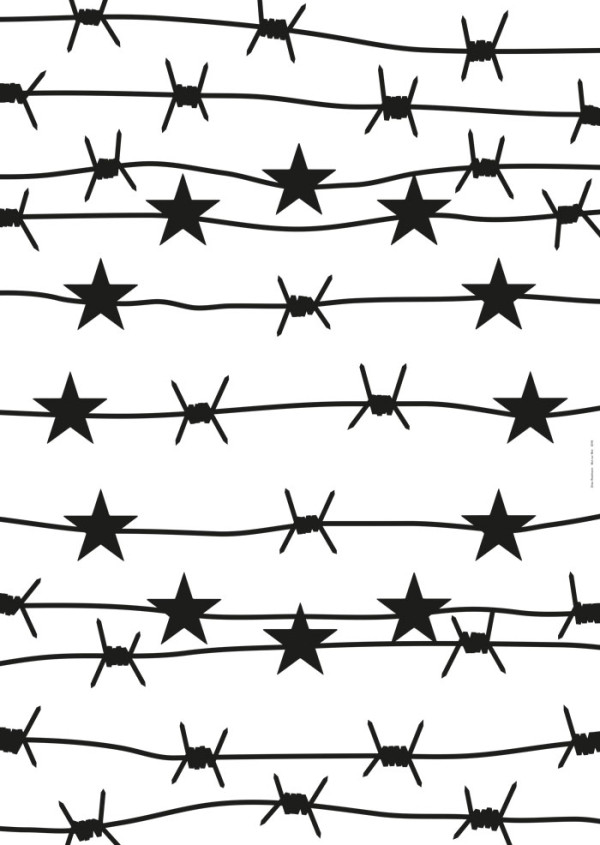 Since the landroute across Balkans is closed dying in the Mediterranean Sea continues. 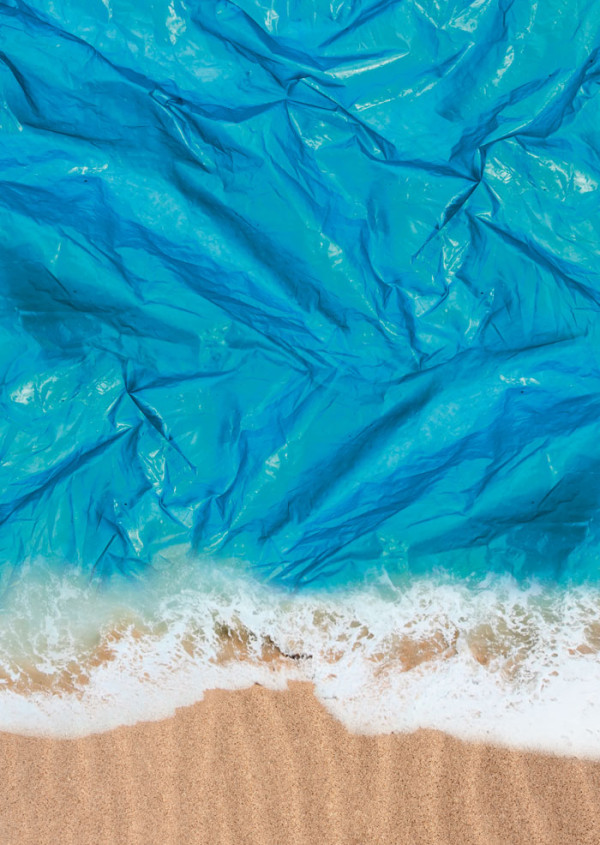 The increasing amount of plastic in our oceans changes the life of millions of sea creatures. They are literally drowning in plastic. Therefore, this idea raises the question how long it may take until this flood of plastic will be washed to our shores and drown humanity? Do not ignore the threats of plastic for our planet just because you do not see it. 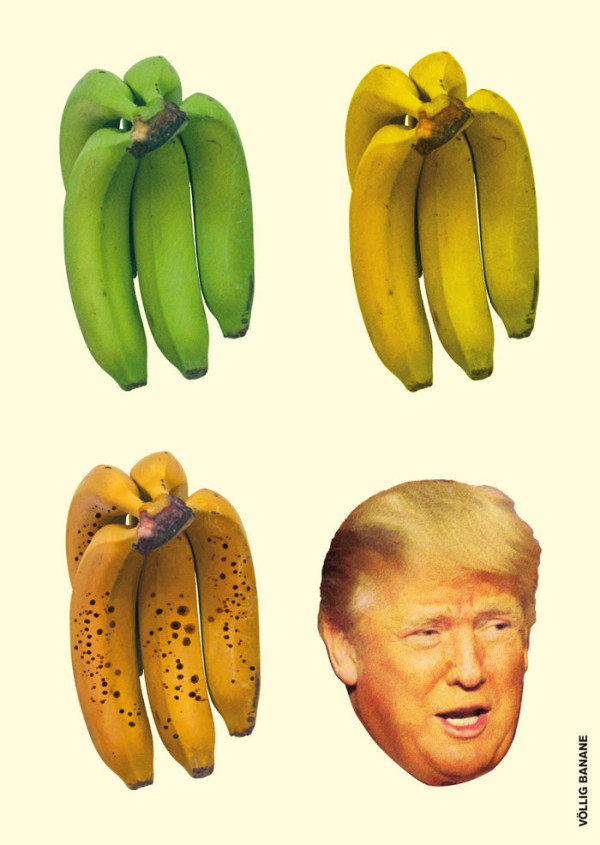 The dangerous demagogy of Donald Trump 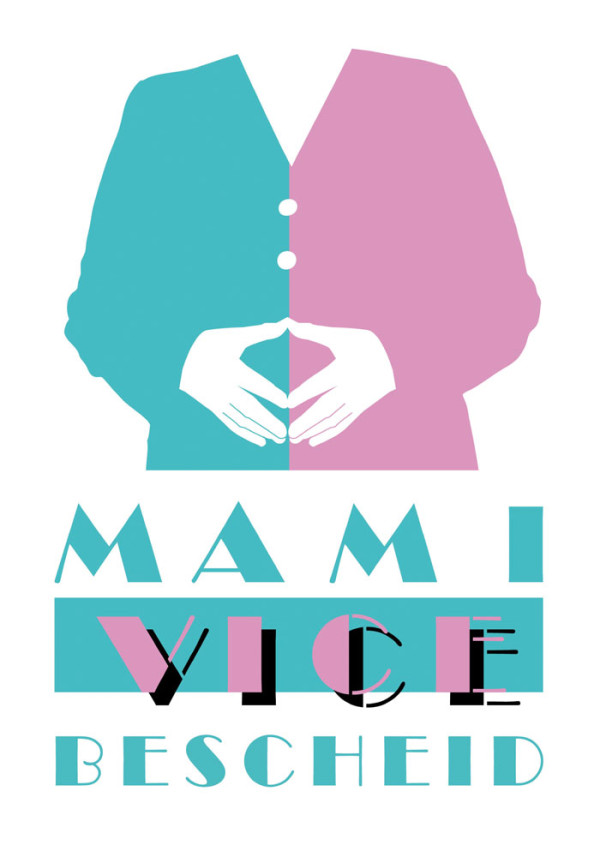 Angela Merkel is the Mum of all Germans. She is known for her signature gesture (forming a rhombus with her hands) and her coloured blazers. Along with her motto “there is no alternative”, it is clear: Mummy knows how it’s done. 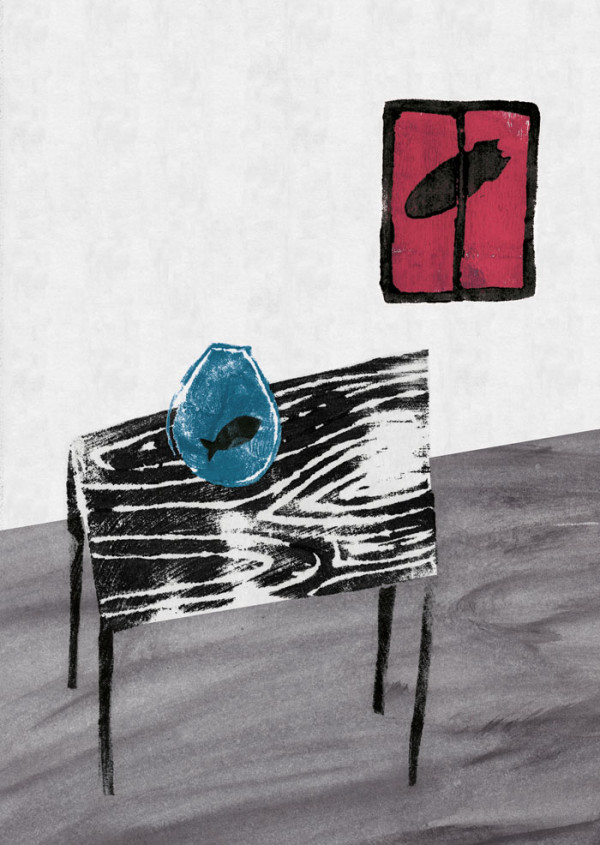 Like the fish in the water we are in our safe and peaceful environment. The feeling of helplessness turns us into passive observers. 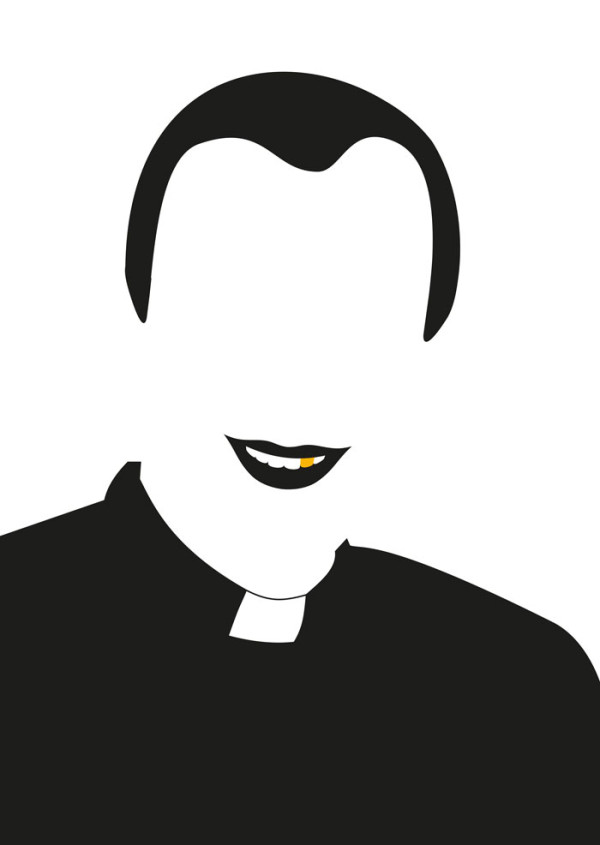 Basic salary, tray, baptisms, weddings, funerals and carols – those are sources of priests earnings. But according to what they say, they earn as much as doctors and pay ten times lower taxes. That sound pretty good. Divine life! 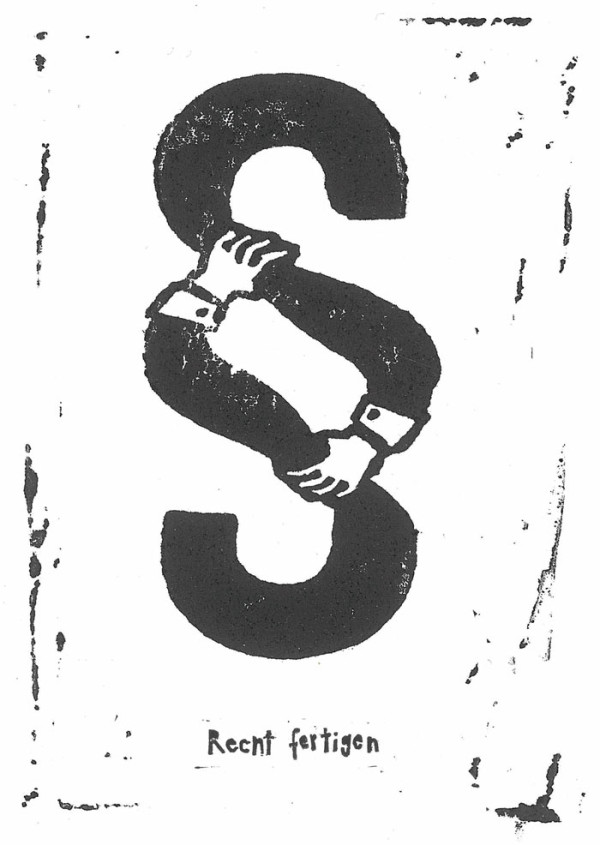 Who is deciding over rights?
Rights made for whom and by whom?
Can we categorize human beings by laws?
Is it sometimes just convenient to cling to paragraphs and thereby shirk responsibility? 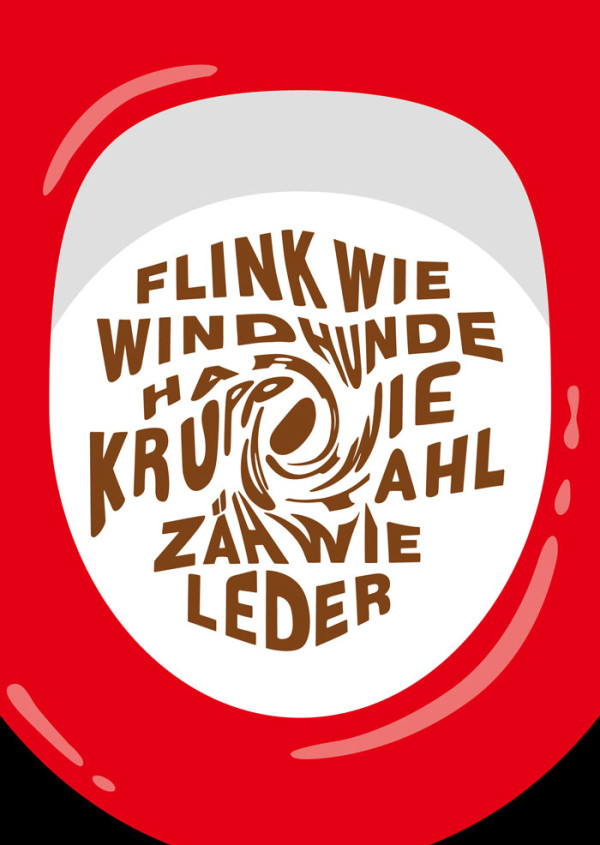 Hitlers quote about the german boy is well known all over the world. It is both naive and lowbrow at the same time. 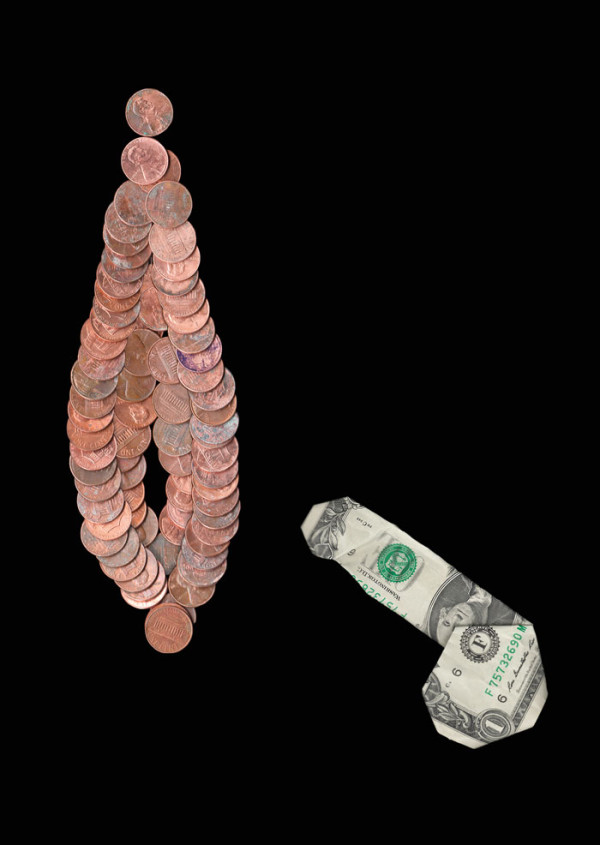 In 2015, women in the United States were paid roughly 79¢ for every dollar men were. While this image depicts one regional statistic, the broader objective is to call attention to the myriad injustices faced predominantly by women in the workforce. In addition to unequal pay, issues like sexual harassment, biased dress codes, and lack of paid and/or adequate family leave continue to plague workers throughout much of the world. 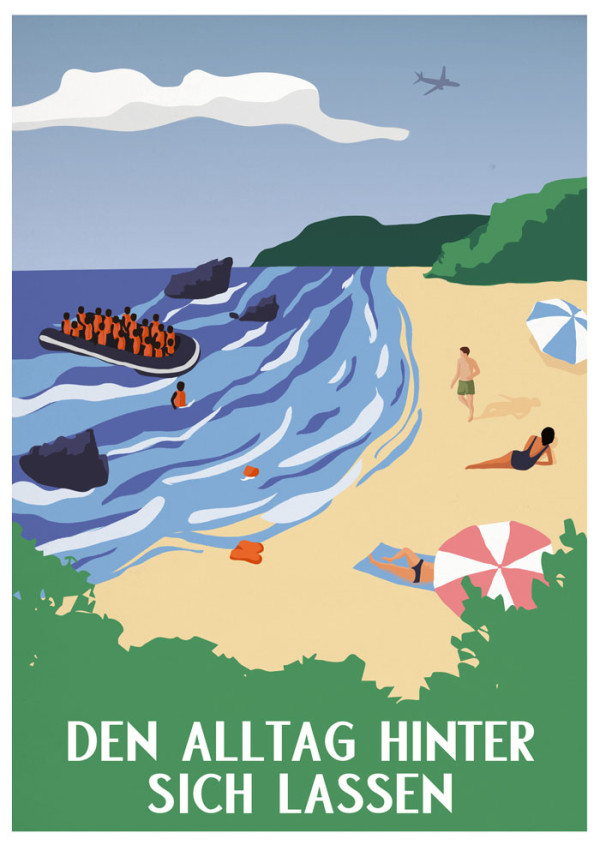 Leave the Everyday Behind

In this absurd and strange situation worlds collide. On the one hand you see tourists, looking for pleasure and relaxation and on the other hand refugees, risking their lives to escape war, persecution and distress. A scene where suffering of the „aliens“ cannot be ignored. The question is, however, why a legal and secure entry is not allowed to such people seeking protection. 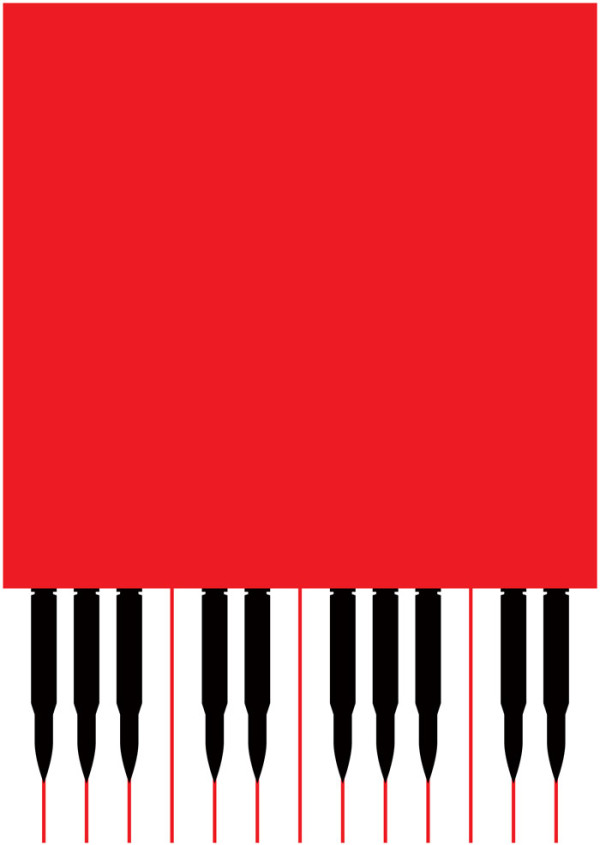 To some of the leaders of the world the idea of war is the same as the music notes which they play whenever they want without considering the consequences, and as a result, countless civilians and soldiers die without a reasonable cause! 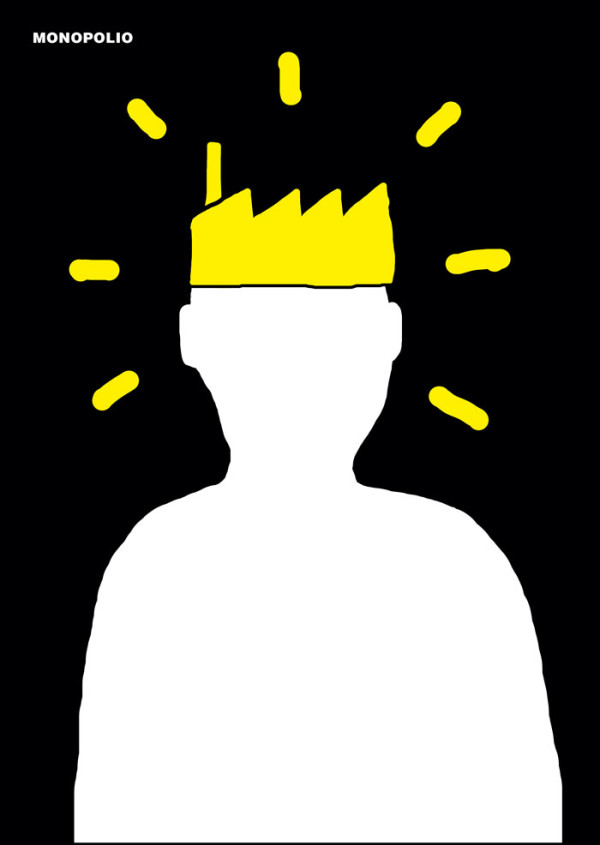 This poster was made to denounce the concept of corruption. It is a personal vision on monopolistic practices, an analogy between industry and the monarchy where there is a single leader. 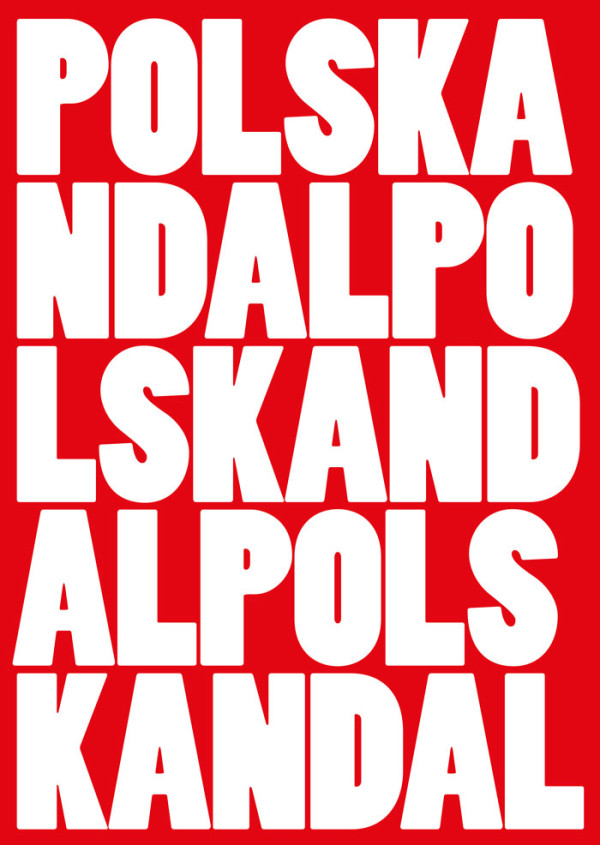 Take a look at Poland these days, and you will see one scandal after another. Suppression and decay of democracy in the heart of europe. 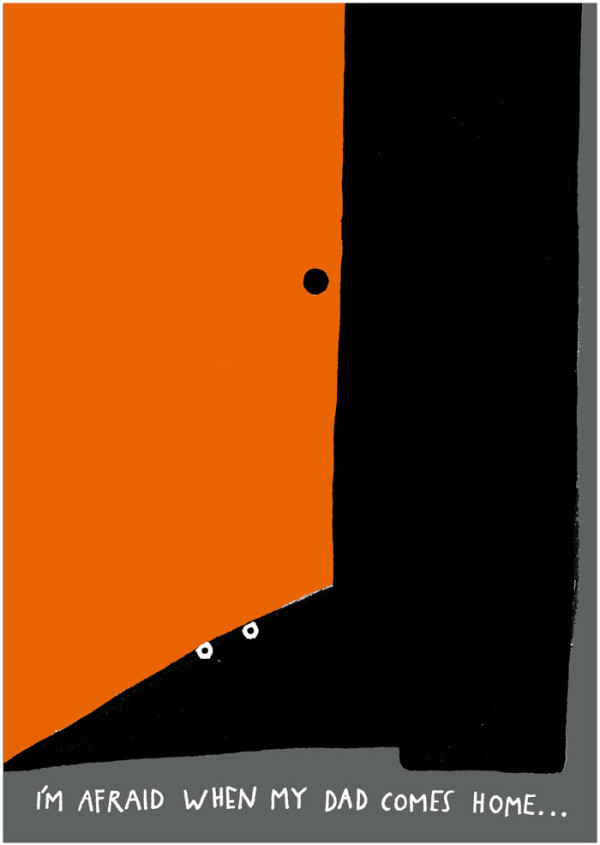 My poster represent the fear that children feels when they are abused from their own fathers. The poster is like the shoe of the father when he is coming home and at the same time is like the door of the home with the afraid eyes of the child.